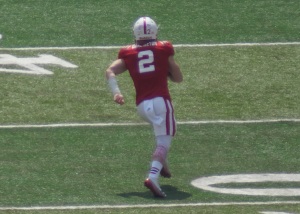 New head coach Mike Riley presided over his first Spring Game at Nebraska on Saturday. The score (Red 24, White 15) didn’t mean much, but there were a number of lessons to be drawn from the performance.

The most important thing to remember about the Spring Game, though, is that it is really just a glorified practice—one of fifteen in the spring, with another entire camp coming this fall. The results and performances of the Spring Game should be viewed through that lens and weight given accordingly.

Having said that, there are two glaring areas of concern Riley must have after seeing how his team performed under the lights and in front of the crowd. It might only be two areas, but it’s fair to say they’re big ones.

Here’s the stat lines for Nebraska’s quarterbacks at the Spring Game:

That’s just not good enough. Yes, some of the incompletions were dropped balls (more on that in a bit). But at least on the evidence of one practice (in front of 76,000 people), the only quarterback in whom you could put any faith in accurately delivering the ball was redshirt freshman Zack Darlington.

Again, remember the caveat about this being just one practice. But Armstrong’s completion percentage numbers were about what they have been so far in his career, making fair the question as to whether those can reasonably be expected to markedly improve.

Nebraska’s woes with the forward pass on Saturday weren’t limited to the quarterbacks. Time after time, when passes were delivered on target, receivers were unable to make the catch. Wide receivers, running backs, and tight ends were all guilty of drops in situations where a catch should have been made.

Of course, the two concerns run together. Nebraska’s run game looked effective, with jet sweep action (and play fakes off of it) putting stress on a defense horizontally and providing an opportunity to get playmakers like De’Mornay Pierson-El the ball in space.

But if Nebraska’s passing game is as anemic as it appeared on Saturday, it won’t take long for opposing defenses to scheme for the run and dare Nebraska’s quarterbacks to win with their arms. On the evidence of Saturday’s performance (which, again, is limited evidence), it’s hard to have too much faith in their ability to do so.

In other words, Riley and company still have a lot of work to do before Nebraska tees it up against BYU on September 5.