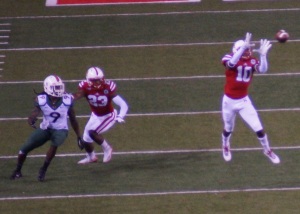 Nebraska football fans know that fall camp is starting soon, and one of the biggest things for new head coach Mike Riley to do during fall camp is to sort out contested positions. Some positions are fairly clear, but a number of positions on Nebraska’s roster will force Riley to make some decisions.

Here are five of the positions where the battles for playing time should be the fiercest.

Of all the battles, this position might be the most contested, simply because of the talented options available. Last year, Ameer Abdullah’s brilliance made it hard for any running backs to get much playing time, and the statistics showed. Abdullah had 62.7 percent of all rushing attempts by running backs in 2014.

That doesn’t leave a lot of room for an heir apparent, so the I-backs returning this year (along with the new guys) will all be starting from a fairly level playing field. Given the way the backs were used in the Spring Game, Terrell Newby looks to be the most likely to start against BYU in Nebraska’s opener. But Imani Cross, Adam Taylor, and Mikale Wilbon should all have their chances to earn playing time in fall camp.

The offensive line if your name isn’t “Alex Lewis”

At left tackle senior Alex Lewis looks to have his place locked up next season. Tom Dienhart of the Big Ten Network calls Lewis a “cornerstone” for Nebraska in the upcoming season. But the rest of the offensive line is a huge question mark.

Givens Price should have a chance to compete at right tackle, with David Knevel right behind him. Chongo Kondolo and Dylan Utter will be battling with Tanner Farmer, DJ Foster, and others at guard. And at center, Ryne Reeves and Paul Thurston should be the primary contenders.

Nebraska’s starters at defensive tackle seem pretty clear, with Maliek Collins and Vincent Valentine taking up the middle. But at defensive end, Nebraska has a number of players who should be fighting for time.

Greg McMullen, given his history at the position, should be one of the first names on the list. But behind McMullen, Jack Gangwish looks to be battling with Joe Keels and AJ Natter for the other spot at end. And younger players like Sedrick King and Daishon Neil be challenging for playing time. Keep special watch on converted tight end Freedom Akinmoladun, whose athletic ability could make him the surprise of the unit.

This position isn’t so much about who will be a starter – Nebraska is so thin at linebacker, that anyone with returning experience is likely to earn a starting job almost by default. Absent injury, Josh Banderas and Michael Rose-Ivey should be all but guaranteed a starter’s role.

But behind those two is an interesting battle. Returners Luke Gifford and Marcus Newby might have first crack at the whip. But incoming freshman Dedrick Young will have a great chance to earn playing time, as he was an early-enrollee. And the other true freshmen (Mohammed Berry, Tyrin Ferguson, and Adrienne Talan) will get their shot as well.

This caption is a little misleading, as one starting cornerback spot (Daniel Davie) and one safety spot (Nate Gerry) are likely earned already from last season’s performance. But the other spots should be the subject of fierce competition, given the depth of talent at the position.

At cornerback, Charles Jackson,  Josh Kalu, Trai Mosely, and Jonathan Rose will be fighting with incoming freshmen Avery Anderson and Eric Lee to see the field. And at safety, Byerson Cockrell and Kieron Williams will be challenged by incoming freshmen Antonio Reed and Aaron Williams (as well as any of the players at corner who may slide into the position).