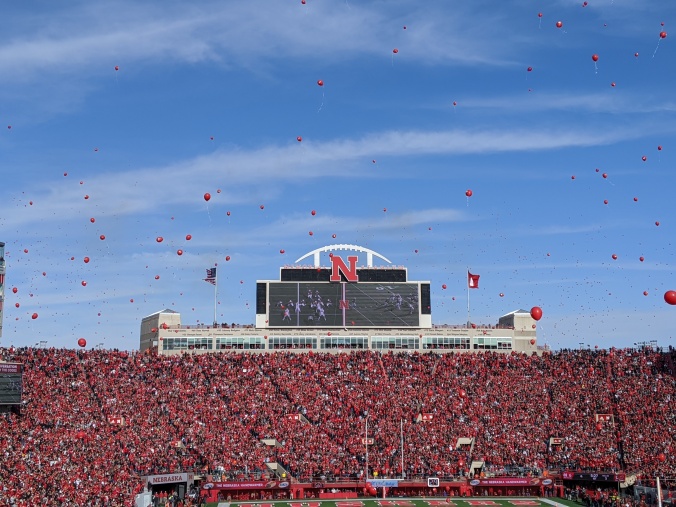 It wasn’t as bad as we expected, was it, Husker Fan?

Wisconsin came to Lincoln and beat Nebraska 37-21, but in the loss NU showed signs of life we haven’t seen all season. Head coach Scott Frost’s offense finally showed signs of life, outgaining Wisconsin 493-482. Fourteen of Wisconsin’s points came from two broken plays, a kick return touchdown and a 55-yard reception that ended up being a clinic on how to miss tackles from the Blackshirts. Nebraska had plenty of opportunities to put points on the board, but failed to cash in.

So in reviewing the game, here’s what we saw.

Against Wisconsin – currently the no. 12 rushing defense in the nation – Mills had 17 carries for 188 yards.

With freshman phenom Wan’Dale Robinson out injured, Mills had to shoulder the lions’ share of carries, and he answered the bell remarkable, running with speed and decisiveness we haven’t seen this season. If this Mills shows up for the next two games, Nebraska’s quest for a bowl game will be boosted significantly.

Extension Suspense. Just before the game, Nebraska athletic director Bill Moos announced that Frost was signed to a two-year extension, putting him under contract until 2026. To the locals, the announcement seemed a little strange, as there didn’t seem to be much question about whether Frost’s job was unsafe.

Initially, my thought was that Frost and Moos had at least a suspicion that the rest of 2019 was going to go badly, and to provide some pre-emptive support to head off a disgruntled fanbase. But after listening to other commentary, it does seem more likely that the main reasons for recruiting.

After all, both Florida State and Arkansas fired their head coaches before they finished their second seasons. Sure, Nebraska’s situation is far different from the other two programs – but that’s only if you know the history of Frost with Nebraska. The kids who are being recruited have no such knowledge, and you can bet that coaches competing against Nebraska for those kids aren’t being shy about comparing Nebraska to Florida State or Arkansas.

So Frost’s extension is an inoculation against that negative recruiting. There was little chance Frost wouldn’t be in Lincoln for many years to come. By giving him the extension, Moos is making it that much easier for Frost to be successful.

A Kicker Away. Try this thought experiment with me. Even if everything else remained the same – Jonathan Taylor going over 200 yards, Adrian Martinez’s baffling 20-yard sack and backbreaking interception, Nebraska’s secondary attempting to tackle Wisconsin receiver A.J.  by pretending they are torpedoes without arms – Nebraska was still a competent placekicker away from winning the game.

Nebraska missed a 41-yard field goal and failed on fourth down attempts from Wisconsin’s 34, 15, and 1. Field goals from those positions would have been from 52, 32, and 18 (!) yards. A kicker that could go 4-for-4 from those distances would have added an additional 12 points to Nebraska’s tally.

And don’t forget Nebraska’s disastrously short and misplaced kickoff directly after its first touchdown, which Wisconsin returned for a touchdown of its own. A better kick almost certainly takes the touchdown return off the table, and at least forces the Badgers to drive the field to score. In other words, having a competent placekicker would have taken seven points off Wisconsin’s score.

The point of this thought experiment isn’t to find excuses as much as it is to find silver linings. With Nebraska sitting at 4-6 after two straight 4-8 campaigns, it can seem like Nebraska is (in Frost’s words) “miles away” from glory (quote from Mitch Sherman of The Athletic).

That’s not the case though, at least it wasn’t against Wisconsin. Nebraska, even with all its 2019 warts, was still just a competent placekicker away from beating the Badgers.

Negatives in Positive Territory. If you have watched Nebraska this year, you know it seems like it has been in enemy territory all the time with precious little to show for it. So I decided to lift the hood and look at what Nebraska’s done against Power-5 opponents this year.

What do these numbers tell us? Well, here’s what I took from it.

So yeah, you weren’t imagining things. The numbers back up what your perception likely was – that Nebraska’s struggles can really be focused on the area from the 50 to the opponent’s 25 yard line.

And The Weight of Moral Victories

And yet the mood walking out of Memorial Stadium was – optimism?

Part of that comes from an offense that finally returned to life. Nebraska outgained Wisconsin even as it lost by 16 points – and that’s hard to do, y’all. But Frost’s calling card has always been his offensive prowess. So the offensive doldrums Nebraska endured for the last three games really did seem like an existential challenge for Frost’s success at Nebraska.

Seeing Nebraska succeed offensively, even in a loss, helped fuel the fire of hope. And even though defensive coordinator Erik Chinander took more than his share of barbs, the fact that Wisconsin’s offense (absent a few chunk plays) had to work its way down the field on the Blackshirts was a pleasant surprise.

Some of this might be the poverty of low expectations. Some of it might just be a fanbase wandering through the desert of mediocrity and desperately clinging to any drop of hope. But whatever it is, in this Upside-Down world that is Nebraska football now, Husker Fan is feeling better about things after a 16-point home loss to a conference rival.

At the very least, though, Wisconsin is stuck having to house the hideously ugly Freedom Trophy for another year. Take that, Badgers.