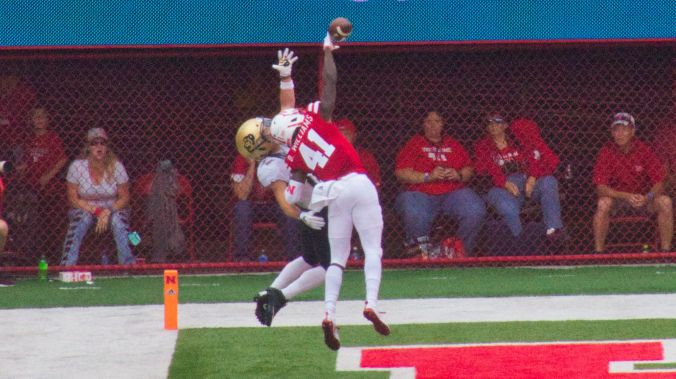 As the calendar has turned to July, excitement about the 2019 Nebraska football season is turning to a fever pitch. Multiple national outlets are predicting Nebraska to win the B1G West and be a dark-horse College Football Playoff contender, even coming off consecutive 4-8 seasons.

There’s plenty of reasons for that optimism, of course. Head coach Scott Frost has a proven track record of success, including his remarkable turnaround of UCF. Sophomore quarterback Adrian Martinez put on an amazing show last season – the second coming of Russell Wilson, at times – and should do nothing but improve in 2019. Nebraska’s schedule is far less daunting on paper than last year’s, with no Michigan and games against Ohio State, Wisconsin, and Iowa at home. And if you look at the analytics, Nebraska’s expected wins from 2018 shows the team wasn’t nearly as bad as the final record suggests.

But the 2019 Nebraska squad is young, with significant holes to fill from a team that has been 8-16 in the last two years. So if Nebraska is going to match those lofty expectations, these players must be able to be effective.

Jurgens arrived in Lincoln as a highly-touted tight end prospect. But an ankle injury and a crowded tight end room gave Frost an opportunity to propose a position change for Jurgens. And not a small one either – from tight end to center. Jurgens took to the position change well, according to Brent Wagner of the Lincoln Journal-Star.

“I mean, shoot, you get to line up and hit someone every play, what’s wrong with that?” Jurgens said. “I love it. I get to be physical every play.”

It’s a great attitude. But it doesn’t change the fact that if Jurgens starts at center in 2019 – and it’s likely that he will – it will be his first time taking a snap in anger at the position. Given how crucial the center position is, and what a big ask it would be for Jurgens to go from tight end to starting B1G center in less than a year – Nebraska will need Jurgens to be a quick study.

Devine Ozigbo’s breakout senior season last year was a delightful surprise, and helped salvage the position after transfer running back Greg Bell failed to deliver and ultimately transferred out of the program. But Ozigbo is with the Saints now, and the fate of Maurice Washington is very much up in the air.

Nebraska does have some talented freshmen coming to campus. But the bulk of the responsibility for success at the running back position will come from Mills, a junior college transfer who started his college career at Georgia Tech.

Mills arrives with power-five running back experience, and looks well suited to hit the ground (pardon the pun) running on day one. But we haven’t seen him in a Nebraska uniform yet, certainly not against B1G defenses. How Mills answers that call will go a long way towards how well Nebraska will be able to meet the lofty expectations it carries this summer.

Of course, Robinson almost didn’t end up in Lincoln. Originally Robinson committed to Kentucky, but with the persistence of the Nebraska coaching staff Robinson changed his mind and became one of the standouts of Frost’s first recruiting class.

While Nebraska does have a crowded receivers room, no one quite has the combination of speed and elusiveness that Robinson brings. A perfect fit for Frost’s Duck-R running back/wide receiver hybrid, Robinson has the potential to bring an entirely new dynamic to Nebraska’s offense. And with a shaky receiver corps after J.D. Spielman, if Nebraska’s offense is going to shine it’s going to need some extra dynamism in 2019.

It’s not like Williams didn’t see the field in 2018 as a sophomore. He played in 12 games, and at times flashed the kind of athleticism that could make him a special talent at safety. But he struggled to maintain playing time, particularly behind seniors Aaron Williams, Antonio Reed, and Tre Neal.

Well, that’s not going to be a problem this year. Williams has the athleticism and talent to be an impact player on defense, particularly at safety. But Nebraska needs Williams to be far more consistent if he’s going to take on a starter’s role.

It’s a little strange to say that a player is going to be critical on the defensive line, given that it is likely Nebraska’s strongest and deepest position group. But this is also the group that struggled mightily against the run, and was likely Nebraska’s biggest Achilles’ heel against power-running B1G teams like Wisconsin and Iowa.

So Nebraska needs much better play, particularly in run defense, from its defensive line. But even more so, a graduate transfer like Daniels can bring leadership, attitude, and a level of toughness and experience that might help Nebraska’s defensive line find its potential and be a leader amongst position groups in 2019.