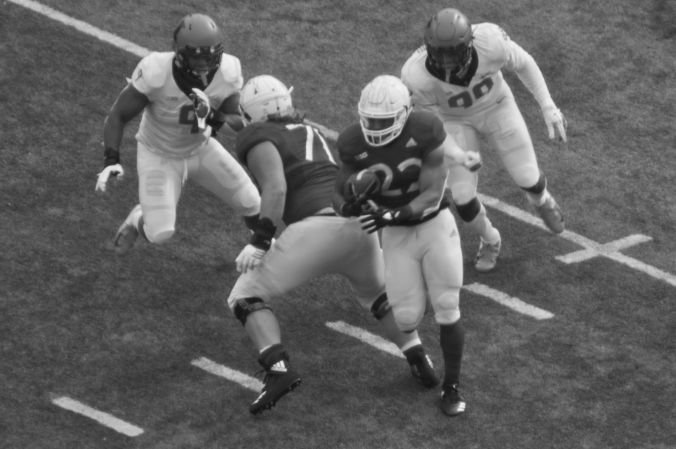 Nebraska’s alternate uniforms were a throwback to 1923, but the game in which the uniforms were worn was very much a creature of the 21st century, with Nebraska winning a shootout over Illinois, 54-35.

Nebraska’s offense was humming, notching 606 total yards, while the defense struggled some, surrendering 509 yards. But Nebraska was plus-three in turnover margin, which helped NU avoid any risk of an upset bid from the Illini.

So in reviewing Nebraska’s third win of the 2018 season …

Divine Devine. Hey, remember when this dope looked at senior I-back Devine Ozigbo and just saw him and Mikale Wilbon as “returning with the most experience?”

Well, Ozigbo proved that dope wrong. He’s currently no. 25 nationally in rushing yards per game at 95.8. He’s been both the chain-mover and the homerun threat out of the backfield that Nebraska has been needing. He’s been a revelation and, as head coach Scott Frost said, looks very much like a Sunday kind of guy next year.

Nine-Tenths of the Law. One of the fears about Nebraska’s tempo spread attack is whether NU would be able to protect its struggling defense by possessing the ball. Early in the season, that was an active question when Nebraska was in position to win.

But in the last two games, Nebraska was able to execute clock-chewing drives. Against Ohio State, in the second quarter Nebraska had a 10-play, 64 yard drive taking 4:00, and an eight-play, 47 yard drive taking 3:54, both resulting in touchdowns. Against Illinois, in the third quarter Nebraska had a seventeen-play (!), 82 yard drive for a touchdown that took a full 7:48 (!!) off the clock – and included three fourth-down conversions.

Those time of possession numbers aren’t mind-boggling, but they are evidence that Nebraska’s offense does have the ability to keep its defense off the field for at least a little while, minimizing the stress being put on an already thin unit. Seeing this kind of complimentary football is both reassuring and encouraging going forward.

Special Teams. Against Bethune-Cookman, Nebraska returned a punt for a touchdown. This week, Nebraska blocked a punt. More importantly though, it looks like Nebraska has solved to a large degree its issue with kickoff return coverage. Against Illinois, Nebraska averaged 13.8 yards per return, and only 9.3 yards per return against Ohio State.

Homecoming. Welcome home, AJ Bush. After a couple of stops, the Nebraska transfer started a game at quarterback in Memorial Stadium, but for Illinois. And he had himself a game, rushing for 187 (!) yards on 25 attempts with three (!!) touchdowns. He added in 126 yards through the air, but on an 11-for-25 day with two interceptions (although, in fairness, his receivers didn’t exactly help him out).

For Nebraska fans with a sentimental streak, it was the best of both worlds. A former Husker got to have his day in the sun and put up some numbers, while Nebraska was still able to notch a win. That, of course, is easier to say after the game as opposed to when Bush was running wild and answering Nebraska score-for-score.

Walking Wounded. Both receiver JD Spielman and I-back Maurice Washington appeared to suffer injuries against Illinois. Washington has struggled with staying on the field all year, which is not a huge surprise for a true freshman with a slight frame. But losing both – and losing Spielman, in particular – against a stout Michigan State defense would be a huge challenge for Nebraska.

AND THE NEW NORMAL

Blackshirts. Tradition of Toughness. Throw the Bones. In the nineties, much of Nebraska’s identity was defined by defensive prowess. If you play word-association with “Nebraska football,” one of the first images you’ll get is a gleeful Nebraska defender crossing his arms and screaming after a sack.

Sure, some of that is a transition year, and likely has to do with a talent deficit on the defensive side of the ball. But some of it is structural, too.

Take a look at the national rankings of UCF’s defensive performance last year, when the Knights went 13-0 (and won the national championship, amirite?)

That’s better than Nebraska’s rankings this year, of course. But it’s not elite. At best it’s middle-of-the-pack good. And that’s in a year where UCF went undefeated.

Ultimately, a football team reflects the nature of its coach. Under a defensive-minded coach like Bo Pelini, Nebraska would take its cues from its defense, and Nebraska’s 10-3 upset of Oklahoma should be looked at as a model for how Pelini’s teams would win.

Frost is, schematically, the opposite of Pelini. He’s an offensive mind who wants to outscore you – and is perfectly content to let you score a few points in the process. UCF’s 62-55 overtime win over Memphis in the American Athletic Conference title game might have been an extreme version of it, but it still fits into the template of how Frost’s teams win games.

This isn’t to say that Nebraska fans shouldn’t expect – shouldn’t demand – better defensive play. Overall, Nebraska’s defense has not been good enough and needs to be better both this year and going forward. But expectations need to be calibrated for the Blackshirts.

If defensive coordinator Erik Chinander can get his unit into the top-50 nationally defensively, in combination with what Frost’s offense, that should be enough for Nebraska to win a lot of games. But it’s going to look different from what winning Nebraska teams have looked in the recent past.

In other words, Husker Fan, get used to seeing a lot of points on the scoreboard – for both teams. My guess is that as long as Nebraska has more of those points most of the time, though, y’all should be fine.

Follow The Double Extra Point on WordPress.com
Join 143 other followers