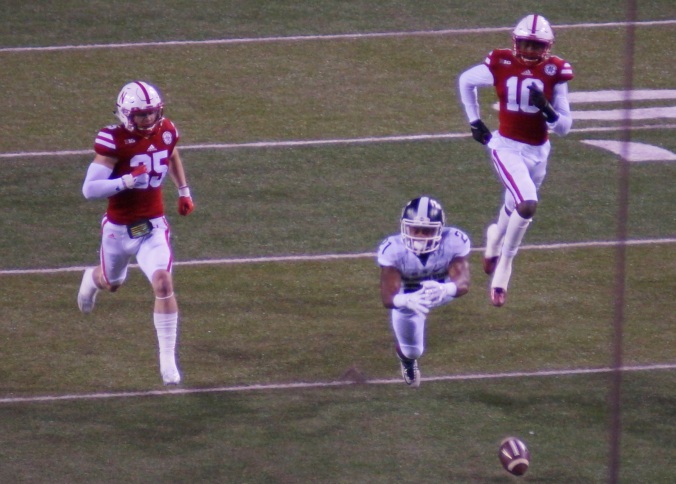 Coming off a 6-7 campaign, it’s fair to say that there might be more than three players who need to improve for Nebraska’s 2016 season to impress. But for Nebraska to right the ship (and, according to one smart and particularly handsome analyst, be favored to win the B1G West title next season), there are three critical players on the roster who need to significantly outperform their 2015 season.

I know, I know, this doesn’t make sense. How can Armstrong not be a player that needs improvement when this dope already said that his completion percentage and touchdown-to-interception ratio weren’t good enough for Nebraska to win a division title?

Because, to be honest, at this point it’s unreasonable to expect those numbers to change. Armstrong is going to be a senior in 2016. For those two most important statistics, here’s what his career numbers look like.

As you can see, Armstrong’s completion percentage has – barely – been improving in his three years under center. His ratio, which was atrocious in his freshman season, actually got worse last year after some promising signs of improvement in 2014.

Sure, a new coaching staff and a new offensive philosophy can explain a lot of Armstrong’s struggles last season. And sure, it’s possible that a second year under offensive coordinator Danny Langsdorf might help Armstrong make a leap in both categories.

But at this point, it’s really hard to assume or even expect that. Armstrong is a senior, who has played 33 games for Nebraska. Much like Taylor Martinez before him, at this point in his career Armstrong is likely who he is going to be – in his case, a great leader, a tough competitor, a dangerous playmaker, and an inaccurate and turnover-prone quarterback.

If Armstrong develops into something more in his senior campaign, then it’s a bonus for Nebraska. But for now, we have to expect Armstrong to deliver about what he has delivered throughout his career.

Gerry has had an … interesting career at Nebraska. As a freshman, then-head coach Bo Pelini moved Gerry to linebacker in an attempt to find his best position. Gerry returned to his position at safety as a sophomore, and looked like he was going to be a world-beater.

That’s a huge change for a safety, and Gerry’s transition was – not ideal. We know what Nebraska’s pass defense, particularly in the fourth quarter looked like last year.

You want numbers? Take a look at these comparisons.

What do these numbers tell us? Well, that Nebraska wasn’t all that much different in terms of both total defense and scoring defense between 2014 and 2015 – with a pass defense that went from no. 32 nationally to no. 122.

That means if Nebraska pass defense improves even to average, then Nebraska’s overall defense should be much better in 2016. It will have to be, if this smart and particularly handsome analyst is right and Nebraska looks to be in contention for the B1G West this year. Gerry, as a senior, will be one of the team leaders, and it’s up to him in his second season under Banker to find his sophomore form.

“A quarterback has never completed a pass when he was flat on his back.” (courtesy of the Houston Chronicle).

Nebraska was no. 78 nationally in sacks. Yes, the pass defense last year was atrocious, and it’s easy to point fingers at the secondary. But the lack of pass rush was a huge contributing factor to Nebraska’s woes defending the long ball.

Unfortunately, there doesn’t appear to be much of a cavalry riding in to the rescue. While Riley’s 2016 recruiting class was impressive, given that Riley was coming off a 6-7 campaign, one glaring deficiency was a true pass rush specialist.

It falls, then, to the players on the roster to heat up the opposing quarterback. And of all the pass rushers on the roster, Akinmoladun looks to be the one most likely to shine. Last year was his first at defensive end after moving from tight end, and Akinmoladun possesses the raw athletic ability to get past an opposing tackle and get home.

For Nebraska to be successful next season, Akinmoladun will need to make that leap.

OK, here’s a comprehensive list of the starters on Nebraska’s offensive line who will be playing in the same positions they manned in 2015.

If that doesn’t frighten you as a Nebraska fan coming into the new season, then you aren’t paying attention.  Nebraska’s offensive line will be undergoing a huge transition, with three new starters being broken in and two players likely shifting positions from 2015.

Of the players shifting positions, Gates will be the one with the most on his shoulders.  Last year, Gates played at right tackle, but looks (based on projections from Ourlads) to be playing left tackle in 2016. That position (especially with a right-handed quarterback) is the most important on the offensive line, and it looks to be filled next year by a redshirt sophomore who has not started a game at left tackle in his college career.

For Nebraska to reach its goals in 2016, Gates will have to excel in his new home on the offensive line quickly.

All stats from cfbstats.com.