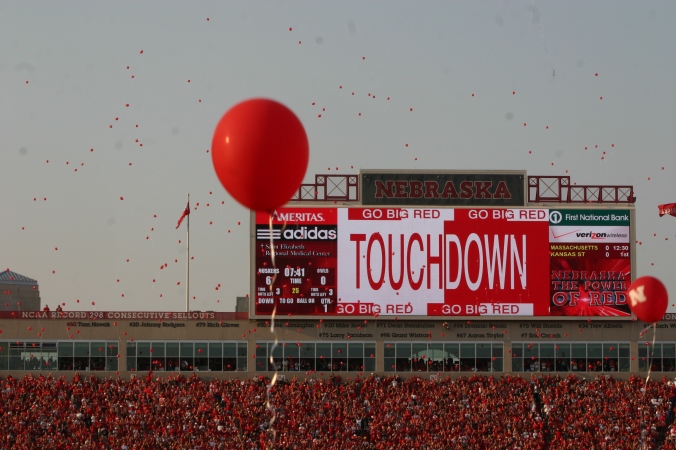 Earlier this week, the sports gambling site Five Dimes set Nebraska’s over-under total at 9.5 for wins in 2016. For the non-gamblers among you, the bet is just what the name of it suggests – you put your money down as to whether you think Nebraska’s win total will be over or under the number selected, in this case nine-and-a-half.

That means this particular sports book thinks the most likely scenario for Nebraska in 2016 is to win between nine and ten games. That’s a pretty bold statement for a team coming off a 6-7 season in 2015.

So, is Five Dimes just counting on rabid Nebraska fans making irrationally exuberant investment decisions? Maybe to an extent, although “souvenir” bets like that are usually on tickets to win a national title put down by chumps like me on trips to Las Vegas. An over-under line set too high will be pounced on by sharks, and could end up costing a sports book lots of money.

That means the book makers at Five Dimes must have some confidence that Nebraska can get to ten wins in 2016 – besides just listening to this smart and particularly handsome analyst who picked Nebraska as the B1G West favorite next season. Here’s what has to happen for Nebraska to get ten wins next season.

A ten-win season almost certainly would require knocking off Oregon in Lincoln on September 16. Given where the two programs have been over the last few years, that sounds like a tall order for Nebraska.

But Oregon isn’t quite what it has been in years past. Quarterback is a huge question mark for the Ducks, hoping FCS transfer Dakota Prukop will be the heir to Heisman trophy winner Marcus Mariota.  Former Michigan head coach Brady Hoke will be taking over Oregon’s defense, bringing his skill set to Eugene but asking the Ducks to learn a new scheme next season.

Nebraska will likely come into this game as an underdog. But with the game in Lincoln, and Nebraska being Oregon’s first big test of 2016 (with no disrespect to UC Davis or Virginia), a win over the Ducks could help put NU on the map. And if the over ticket for Nebraska is to be cashed, NU will almost certainly have to pull the upset.

Yeah, a 5-7 regular season was pretty dreadful for Nebraska last season. But that record includes two head-scratching losses to Illinois and Purdue, both on the road.

The two upsets were very different. Nebraska’s loss to Illinois involved asking Tommy Armstrong to make 31 passes in high winds, while the loss to Purdue had much to do with tossing backup quarterback Ryker Fyfe into the fire due to Armstrong’s injury.

Either way, though, those two games were inexplicable losses when comparing the relative talent levels of the two teams. If Nebraska wins those games, even with everything else that went wrong in 2015, the season would have ended at 8-4. The distance between 8-4 and 10-2 seems far more manageable than the actual records earned last year.

Win on the Road

If Nebraska is going to win ten games, it’s going to have to get work done on the road in conference. Trips to Northwestern, Wisconsin, and Iowa will likely determine Nebraska’s fate in the B1G West. Last year, Nebraska had its contests against those divisional rivals in Lincoln, and lost all three in excruciating fashion.

In 2016, the schedule flips and Nebraska will have to face those teams on the road. And if Nebraska is to reach the ten-win plateau, it will have to do better on the road in 2016 than it did at home in 2015.

Nebraska’s struggles in close games could not have been more well documented. And it would be falling prey to the Gambler’s Fallacy to think that Nebraska was due a run of good luck to make up for all the bad bounces it got in 2015.

Instead, perhaps it’s more reasonable to think that Nebraska’s secondary won’t be quite as vulnerable to the deep ball as it was throughout much of 2015 – a weakness that clearly cost it games against BYU, Miami, Illinois, Wisconsin, and (exhausted deep breath) Northwestern. Add to that a second year in an offense to help Armstrong avoid at least some of the turnovers that doomed Nebraska (such as against Iowa), and you have a recipe to turn those close losses into wins.

If Nebraska is to win ten games in 2016, it will have to find ways to convert those close losses into victories.