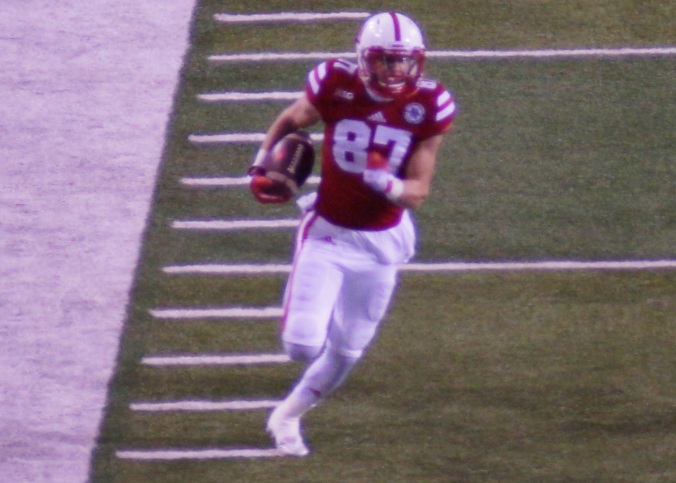 So Sally can wait, she knows it’s too late as she’s walking on by

My soul slides away, but don’t look back in anger I heard you say.

It’s fair to say that Mike Riley’s first season in charge at Nebraska was full of surprises. A 5-7 campaign was a surprise to just about everyone (except one smart and particularly handsome analyst), made all the more difficult to take by how close it could have been to something else.

Football is a game of fine margins, and most teams can point to a play here and there that would have dramatically changed their fortunes. But Nebraska’s 2015 season seemed filled with those turning points.

So here are six turning points of the 2015 season, on which the results of the campaign rested.

No. 6: The Third-and-Seven Playcall against Wisconsin

The Illinois and Wisconsin games have to be looked at together. You can’t really understand the one without knowing what happened in the other. And in this case, it’s a perfect example of one team letting another beat them twice.

Nebraska went back and forth with Wisconsin in an ugly slugfest, but after an electrifying Andy Janovich touchdown (which would have been the play of the season in a fairer world), Nebraska held a 21-20 lead with 3:38 to go. Wisconsin missed a 39-yard field goal on its next drive, giving Nebraska the ball with 1:26 remaining.

Now, this is where the Illinois game comes in. The week before, Nebraska had a chance to bleed the clock and hold on for an ugly win against Illinois. But an incomplete pass on third-and-seven left enough time for the Illini to victimize Nebraska’s shaky secondary and steal a win.

A week later, Riley and offensive coordinator Danny Langsdorf were clearly haunted by the ghost of a week prior. After two runs, Nebraska faced another third-and-seven, and elected to run the ball into a (functionally) eleven-man Wisconsin defense. The play had no chance at all to be successful, Nebraska was forced to punt, and Wisconsin was able to repeat Illinois’ success against the Blackshirts’ secondary.

No. 5: Tommy Armstrong’s Interception in Overtime against Miami

Good grief, the game against Miami didn’t start well for Nebraska. Down 33-10 with 11:14 left in the game, Nebraska was well on its way to being embarrassed on national television.

But then quarterback Tommy Armstrong (with some assist from the now-fired Al Golden, Miami head coach) led Nebraska on an amazing comeback, tying the score at 33 with 33 seconds left and sending the game into overtime.

Nebraska had all the momentum, and a miracle comeback win looked to fill the scarlet and cream sails with positive energy heading into conference play.

And then, on Nebraska’s first play in overtime, Armstrong throws a terrible interception straight into the waiting arms of Miami’s Corn Elder (yes, God help me, that’s his name) and squanders all of the positive momentum gained from that fourth quarter comeback. We’re left to guess what the rest of the 2015 season would have looked like had Nebraska carried that positive momentum forward.

With everything else that happened in 2015, the Southern Mississippi game is easy to forget. But it almost wasn’t.

With 9:30 left in the game, Nebraska had just scored a touchdown and led the Golden Eagles 36-21. In what was a pattern of the 2015 season, though, that lead was far from safe. Southern Mississippi answered with a touchdown to make the score 36-28 with 6:55 left. Nebraska drove to the Golden Eagles’ 8, but Drew Brown’s 29-yard field goal was blocked. Southern Mississippi had the ball with 29 seconds left at its own 20, down a touchdown.

The Golden Eagles got the ball to the Nebraska 40, with time for a Hail Mary. Memorial Stadium was well aware of what happened the last time an opponent tried that play – and that Southern Mississippi knocked off Nebraska in Bill Callahan’s first year in charge as well. So the tension level was high when quarterback Nick Mullens dropped back to heave the ball towards the end zone.

But he never got the chance. Defensive end Freedom Akinmoladun got home and sacked Mullens, preventing Southern Mississippi from asking any questions of a reeling Nebraska secondary. It’s hard to imagine given the way 2015 broke down, but were it not for Akinmoladun’s sack, the season could have been much worse.

Welcome to Lincoln, Coach Riley. Mitch Mathews’ Hail Mary catch was one of the iconic moments of the 2015 season nationally (according to ESPN’s Mitch Sherman). And it certainly set the tone for Nebraska’s 2015 season.

Just about everything went wrong for Nebraska on that play. Nebraska chose to rush three, leaving nine back in coverage against BYU’s cadre of tall receivers. One of those three rushers was injured on the play, leaving BYU quarterback Tanner Mangum plenty of time to roll out and heave the ball deep. It didn’t make it, but with no Nebraska defender in front of the play, Mathews’ big body was able to fall into the end zone after making the grab.

The BYU game is really more of an exercise in what-ifs. Had Nebraska held on and won that game, would its mindset have been different going into Miami? Into Champaign? We’ll never know, of course, but it’s hard not to imagine that a hard-fought win over the Cougars would have translated into a far better performance in the rest of the 2015 season.

No. 2: The Third-and-Seven against Illinois

If there was any play that really sunk Nebraska’s season, it was this one. Even after a sloppy, ugly performance, Nebraska had a 13-7 lead with just over a minute to go. It was third-and-seven on the Illinois 27. The Illini had no time outs, so any play that keeps the clock running gives Illinois the ball with about 20 seconds and the length of the field to go, needing a touchdown.

Instead, Armstrong threw an incomplete pass to Janovich. You know the rest of the story.

The thing is, rolling Armstrong out was a perfectly legitimate call. Armstrong just has to know – and coaches have to make sure he knows – that he can’t let the clock stop. And yet that’s just what happened on that fateful third-and-seven, which set the events in motion that cost Nebraska the game.

And not only the game. As discussed earlier, the ghost of this loss haunted Nebraska and led to the doomed-to-fail third down call against Wisconsin that cost Nebraska another game.

So imagine if Armstrong slides instead of throwing the ball, and Nebraska escapes Champaign with an ugly 13-7 win. Then, not haunted by that play, Nebraska does something other than beat its collective head against an eleven-man Wisconsin front, gets a first down, and holds on to beat the Badgers. Even if everything else remains the same, the season ends at 7-5, and feels a heck of a lot different.

I toyed with where this play should be, or even if it should be on the list. Ultimately, it’s here because Nebraska’s win over the Spartans rescued Riley’s fledgling career in Lincoln. A loss to Michigan State puts Nebraska at best at 4-8, and very possibly at 3-9 given the negativity surrounding the program at the time. Riley’s a positive guy, but that would have made for a very, very difficult offseason.

Instead, the win gave Nebraska fans – and Nebraska players – a desperately needed taste of hope for the future. This is what Nebraska can be, beating a top-10 team on national television, when things go right. The celebration of the players after that game told the story of just how important the win was for the program. If Nebraska goes on to win a conference title in the next two or three years (a legitimate possibility, if things break right), then the Michigan State 2015 win was the bedrock upon which those championships were built.

And yet, the argument could be made that the specific play wasn’t all that critical. First of all, the decision not to call Reilly ineligible for going out of bounds was, at best soft. Even Riley himself said he was expecting the penalty to be called.

But so what if it was? Anyone who was watching the Michigan State secondary and how in-rhythm Armstrong was would be comfortably sure that Nebraska would have been likely to score anyway. It’s no guarantee, of course, so that’s why the play remains at the top of the list. But I’m convinced that even if the flag would have been thrown, Nebraska would have won that game regardless.