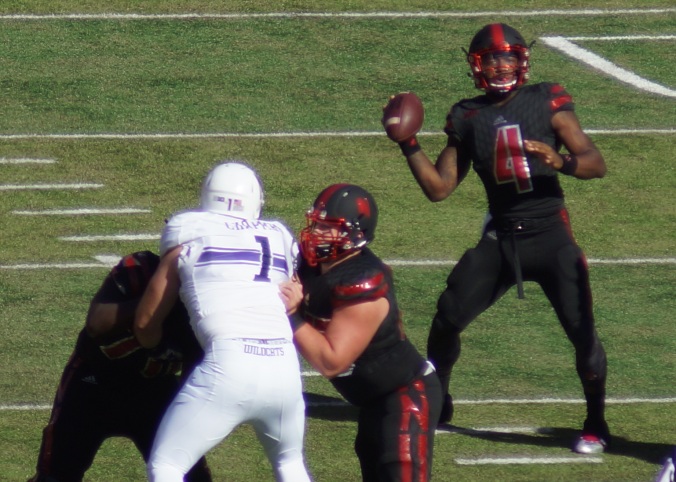 After Nebraska’s 28-20 loss to Iowa left the Cornhuskers at 5-7 for the 2015 season, NU’s fans were left looking to the future. While a bowl game looks to be in the cards, most Nebraska fans are more than ready to turn the page on 2015. But before we let the season go, it’s time to learn what lessons have been learned.

Some, like this dope, thought that Nebraska wouldn’t miss a beat when Mike Riley took over from Bo Pelini. Nebraska would be able to retain the best of what it did previously, clean up its mistakes, and take a step forward.

Others, like this smart and particularly handsome analyst, saw Nebraska’s 5-7 season coming.

A new offense and a new defense – and, most importantly, a roster full of players not recruited for the coaches’ system – is a recipe for a rough transition. And even though some of the losses were of the heartbreaking and head-shaking variety, the fact remains that Nebraska had seven of them in 2015.

Hopefully for Nebraska fans, the extra practice from a bowl game (and NU fans better not ever complain about “too many bowls” again) along with an extra year in the system should make 2016 a much better experience.

The Quarterback Is Important

Now that the jury’s in on the 2015 season, let’s take a look at how Tommy Armstrong did.

Clearly, Armstrong was asked to do more this year than last, with an extra 83 passing attempts (an additional 6.92 attempts per game). Some of that was due to the change in offenses with a new staff, and some was due to the absence of a game-changing back like Ameer Abdullah.

Unfortunately, at the end of 2015 Armstrong’s results didn’t look that much difference than Armstrong in 2014. Armstrong’s completion percentage made a marginal improvement, certainly not enough for Nebraska to be successful. And, worryingly, Armstrong’s touchdown-to-interception ratio got significantly worse, going from 1.83 in 2014 to an abysmal 1.05 in 2015.

Against Iowa, we saw what that number means. Nebraska outperformed Iowa in just about every statistical category. Nebraska’s defense – the source of distress for most of the season – did more than enough to win the game. But Armstrong’s four interceptions were the difference between victory and defeat in this year’s Heroes Game.

That’s to take nothing away from Iowa’s win. The Hawkeyes are a solid squad of ham-and-eggers, doing what they do and waiting for you to make the mistake. That formula has earned Iowa a trip to Indianapolis for, functionally, a play-in game for the College Football Playoff.

Armstrong’s performance this year was not good enough for Nebraska to achieve its goals – just like it wasn’t good enough last year. In 2016, a different quarterback has to be under center for Nebraska. Perhaps it’s a different Armstrong, one who can use his remarkable talents and learn to avoid the back-breaking mistakes. Perhaps it’s four-star phenom Patrick O’Brien, who looks to enroll early and get a head start on learning Riley’s offense. Perhaps it’s one of the other quarterbacks on the roster, like Ryker Fyfe, A.J. Bush, or (my dark-horse pick) Zack Darlington, with an additional year learning the system.

But without improvement at the quarterback position, Nebraska has no chance to advance in 2016.

Nebraska found a number of creative ways to lose a football game in 2015. But against Iowa, the refrain was hauntingly similar to losses of Huskers past. Turnovers (four interceptions, and a minus-three turnover ratio) and penalties (eight for 95 yards, compared to Iowa’s six for 54) turned a game that Nebraska dominated statistically into an eight-point loss.

Last year, Nebraska was no. 75 nationally in turnover margin, and no. 56 nationally in penalties (according to cfbstats.com). Against Iowa, the problems that plagued Nebraska in years past came back to cost Nebraska a chance at a winning season in 2015.

Riley is no stranger to seasons like Nebraska’s 2015. In his second stint at Oregon State, Riley finished 5-7 or worse four times in 12 years. By the end of his tenure in Corvalis, Riley was beginning to feel some heat as a result of the team’s performance.

A sub-.500 record one year in four might earn you 12 years in Corvalis, but not in Lincoln. At least some Nebraska fans are willing to give Riley a pass on 2015, given the combination of a new coach and a host of injuries. But Riley has to know that in Lincoln, 5-7 has to be an anomaly, not a recurring theme.

Patience is No Fun

2015 hasn’t been much fun. A series of losses and catastrophic injuries has made Nebraska’s season one to endure more than enjoy. The hope for Nebraska fans has to be that the spade work of 2015 – learning a new system and adapting the roster to meet the demands of the new scheme – will pay off in years to come.

Thanks to a whole bunch of new made-for-TV bowl games, Nebraska should make a post-season appearance. That means Nebraska will get the extra bowl practices, and a head-start on preparations for the 2016 season.

A smart and particularly handsome analyst has said Nebraska should be favored to win the B1G West next season. 2016 seems like a long ways away – and there’s certainly no guarantee of success – but if the crucible of 2015 produces a trip to Indianapolis in 2016, it will all be worth it.

2 thoughts on “Nebraska Football: Five Things We Learned From the Cornhuskers’ 2015 Season”