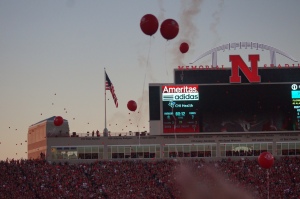 THESE are the times that try men’s souls. The summer soldier and the sunshine patriot will, in this crisis, shrink from the service of their country; but he that stands by it now, deserves the love and thanks of man and woman

Stop me if you’ve heard this one. On Saturday, Nebraska gave up a lead on a final drive and lost to Illinois, 14-13. The loss drops Nebraska to 2-3 on the season, and 0-1 in conference play. There’s plenty to break down, especially that third down play. But at this point, there’s a bigger issue to address.

Nebraska is now 2-3, and here’s what the schedule looks like for the next three games:

A 2-3 record is bad, no doubt. But if Nebraska can’t right the ship next week against Wisconsin, its staring at 2-4. And it’s not like Nebraska’s last couple of games against Wisconsin went well.

Then Nebraska has to travel to Minneapolis to face the Gophers. Dropping that game could put Nebraska at 2-5. And Minnesota has a two-game winning streak over Nebraska.

So if Nebraska’s going to stop the rot, it has to happen this week. We can talk all we want about schemes or personnel issues, But ultimately, that’s not the biggest issue for Nebraska.

At this point, it’s mentality. Nebraska has lost three heartbreakers, games it has played well enough to win. Nebraska is just a few plays away from being 5-0.

But it isn’t. And it’s also a Freedom Akinmoladun sack against Southern Mississippi from a Hail Mary that could have dropped Nebraska to 1-4, too.

Tommy Armstrong has been an offensive juggernaut, Coming into the Illinois game, he was no 10 nationally in total offense after the first four games (according to cfbstats.com). But he’s also the guy who made the critical error to cost Nebraska games against Miami and Illinois.

(And yes, there’s no doubt that the third-down throw was an Armstrong improv. Nebraska head coach Mike Riley said as much in the post-game press conference. And Armstrong wears Brett Favre’s no. 4 for a reason).

So what happens now? How much more heartbreak can a group of college kids endure? At what point does the team lose faith in the new guy and go into the tank?

That’s what we’re going to find out next week when the Badgers arrive in Lincoln. And Memorial Stadium might well be the worst place in the world for Nebraska. Already reeling from heartbreak after heartbreak (after heartbreak) – and, more importantly, not getting the rewards for the hard work they’ve been putting in all off-season – it’s not at all hard to imagine the Nebraska crowd venting its frustration and anger if NU struggles against the Badgers.

So now the Wisconsin game takes on an air of desperation for Nebraska’s season – and perhaps for Riley’s career in Lincoln.

The Good – Front Four Pressure: For most of the game, Nebraska was able to get pressure on Illinois quarterback Wes Lunt with its front four. Moving defensive end Maliek Collins outside at times to help the pass rush was encouraging.

The Bad – The Last Drive: OK, I know, duh. But we learned that Nebraska’s secondary struggles weren’t about scheme nearly as much as personnel. Lunt hit Malik Turner for a 50-yard pass to advance the ball to Nebraska’s seven. That play was against a cover two, meaning that Nebraska’s defensive coordinator Mark Banker left two safeties back to defend against the pass. And it was against Nate Gerry, Nebraska’s most experienced defender.

And The Cock-Eyed Optimist: Yeah, it looks bad. But Nebraska’s next three opponents look to set up very well for NU. Wisconsin just lost at home to Nebraska, 10-6, and has struggled to move the ball. Minnesota has been taking on water all season after giving TCU a game in week one. And Northwestern, while impressive this far, still struggles to move the ball consistently.

A smart and particularly handsome analyst said that Nebraska’s defense is particularly well suited to face off against teams like these. If Riley can keep the team believing it can win – and keep the fans from storming the field with torches and pitchforks – then the next three games are poised for a Nebraska recovery.