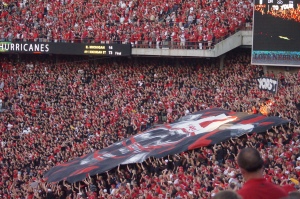 On Saturday, Nebraska survived a shaky fourth quarter to beat Southern Mississippi 36-28, and move to 2-2 on the season. Leading 29-7 after three quarters, Nebraska looked poised for a comfortable victory as non-conference play ended. But a 21-point fourth quarter from the Golden Eagles put them in position for a Hail Mary at the end of the game, snuffed out by a Freedom Akinmoladun sack. So, in looking back for Nebraska …

Freedom! Yeah, cue all the cheesy William Wallace references you want. But Akinmoladun’s sack of Nick Mullens avoided one last test of Nebraska’s shaky secondary – not to mention the coronary health of the Nebraska fanbase.

But Akinmoladun did more than just seal the game for Nebraska. He had four tackles, two tackles for loss, and two sacks in the game. While Nebraska’s struggles in the secondary are the talking point to be sure, his ability to perform at defensive end might be the brightest spot coming out of the contest defensively. A converted tight end seeing playing time due to Jack Gangwish’s injury, Akinmoladun’s growth into the position is crucial for the Blackshirts to right the ship.

A Fullback Sighting. If new head coach Mike Riley wanted to get Nebraska’s old-school fans on board with him, giving the ball to fullback Andy Janovich wasn’t a bad plan. Janovich had five carries for 68 yards (and would have had more absent a penalty), certainly a thrill to Nebraska fans who remember Cory Schlesinger rumbling through an exhausted Miami secondary in January of 1995.

But those runs were more than just an homage to the past. Riley’s offense this year uses a lot of misdirection, and those fullback were a part of the misdirection game. In addition to the jet sweep, opposing defenses now have tape of Nebraska’s tailback going in one direction and the fullback pounding up the middle the opposite way.

For a team still looking to establish a running game (particularly with questionable offensive line performance), adding in the fullback belly play is an important element to Nebraska’s offense.

Continued Excellence. The growth and maturation of Tommy Armstrong as a quarterback might be getting overlooked, or even taken for granted. It shouldn’t be. Armstrong put the ball up 35 times and had a 65.7 percent completion rate for 368 (!) yards, with two touchdowns and one interception. He also ran the ball seven times for 75 yards, meaning he accounted for 443 yards of total offense.

Armstrong is no. 10 nationally – nationally – in total offense after four games (according to cfbstats.com). Some, like this dope, thought that Armstrong was potentially a weakness for Nebraska coming into 2015. Instead, he’s put a team with a struggling defense on his back and willed it through a rough non-conference slate.

The Bad Quarter Came Late. If there was a saving grace about the Blackshirts’ troubles earlier this year, it was that Nebraska was able to adjust and staunch the bleeding. While Nebraska avoided a bad quarter early, it almost picked a horrible time to be terrible as Southern Mississippi carved up the defense late.

Inexplicably, the Golden Eagles waited until the end of the game to test Nebraska deep, finding success in attacking the soft underbelly of the defense.

Lacking a Killer Instinct. Sure, the fourth quarter was scary for Nebraska fans. But it shouldn’t have been if Nebraska had done its job in the first half. Nebraska kicker Drew Brown hit five (!) field goals in the first half, and three of those five were inside 30 yards. That’s a shorter kick than the NFL’s current extra point (which, as an aside, is easily the stupidest rule change in modern professional sports history).

Had Nebraska cashed in just those three drives with touchdowns instead of point-blank field goals, the score would have been 34-0 at the half, and the game would have almost certainly looked more like the South Alabama game in the second half.

Yellow Rain. At this rate, this may become a permanent feature of the ReView. Here’s Nebraska’s penalty output in the first four games of 2015.

Sure, some of those penalties – like the Casey Martin flop that drew a pass interference penalty against Joshua Kalu in the fourth quarter and should stifle soccer critics forever – were soft. But Nebraska still is struggling with alignment and personnel fouls. Those penalties helped keep a team like Southern Mississippi in the game in Lincoln. They could prove Nebraska’s undoing against teams like Wisconsin and Michigan State.

And the Elephant in the Room

There’s plenty of ways to find rose-colored glasses about Nebraska’s non-conference performance. BYU and Miami are legitimately good teams with good talent. South Alabama and Southern Mississippi are not on the level of Nebraska’s talent overall, but both have enough playmakers on offense to cause trouble for Power Five teams (such as the Golden Eagles’ 311 yards passing against Mississippi State earlier this year).

But the fact remains that Nebraska is now no. 128 nationally – that’s dead last, Husker fan – in surrendering long pass plays. Take a look (although it might be wise to shield the eyes of young children) at how that breaks down.

If that number/game statistic doesn’t scare you as a Nebraska fan, you’re made of stern stuff. next week, Nebraska faces Wes Lunt at quarterback for Illinois, who has an NFL-caliber arm. Connor Cook for Michigan State still awaits, C.J. Beathard for Iowa is looking good, and at this point even Wisconsin’s Joel Stave has to frighten the NU faithful.

What is even more disturbing is how the continued struggles in the secondary seem to be affecting the confidence of the squad. As Southern Mississippi continued its fourth-quarter comeback, the Nebraska secondary began to resemble a free throw shooter in basketball struggling at the line, or a golfer with the yips on the green.

A smart and particularly handsome analyst gave some suggestions on how the holes in Nebraska’s defense could be plugged. With Nebraska at 2-2 and a challenging – but still navigable – conference schedule approaching, now is the time for the Blackshirts to consider breaking that emergency glass to get things right in a hurry.