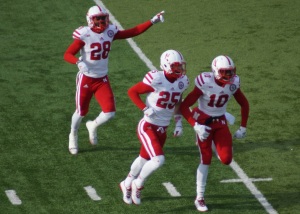 Nebraska faces its first road test of the season and with new head coach Mike Riley in charge, traveling to Coral Gables to face the Miami Hurricanes. For Nebraska fans watching the game at 2:30 p.m. central time on ABC:

You’ll Be Happy If …

Those are numbers good enough to win a divisional title, and compete for a conference title. And if Armstrong can keep those numbers up against the most talented team Nebraska has faced so far this season – and on the road for the first time as well – Nebraska will be in great shape.

Kaaya Gets Heated Up. Yes, Nebraska’s secondary has struggled mightily this year. But that comes in large part from Nebraska unable to generate a pass rush, especially with only its front four. That’s got to change if Nebraska is going to be successful against Miami. Miami quarterback Brad Kaaya is too talented and has too many weapons to be allowed time in the pocket.

So whether it’s Maliek Collins in the middle learning how to deal with double and triple teams, or defensive end Freedom Akinmoladun translating his athletic ability into quarterback pressure, the Blackshirts’ ability to put Kaaya on the ground will be critical for a Nebraska win.

Carter’s Return Is Triumphant. After a two-game suspension, tight end Cethan Carter returns to the lineup for Nebraska. That’s a big deal for a Nebraska squad already thin from injuries with Sam Cotton lost against BYU. Plus, even with Nebraska’s tight end squad fully healthy, Carter is by far the most dangerous offensive weapon of the bunch.

Miami hasn’t seen any tape of Carter in Riley’s offense, and Carter will have a point to prove after missing the first two games. Don’t be surprised if he ends up a huge factor in a Nebraska victory.

There’s A Banderas-sized Hole. Middle linebacker Josh Banderas has been struggling with injury all week, but is expected to play against Miami on Saturday (according to Brian Christopherson of the Lincoln Journal-Star). That’s a big deal, as Nebraska has not yet been able to see its two most experienced linebackers – Banderas and Michael Rose-Ivey – on the field at the same time.

But expected to play doesn’t necessarily mean fully healed. And if Banderas is limited, or has a setback and isn’t able to play at all, then Nebraska’s defense is significantly hampered against the most talented offense NU has faced all season.

The Yellow Emerges. Against BYU, Nebraska had 12 penalties for 90 yards, and it’s hard not to see that as a factor in NU’s razor-thin loss to the Cougars. Against South Alabama, Nebraska was better – but still not good – in penalties, drawing 7 flags for 80 yards.

This game already looks to be chippy, after a fiercely competitive matchup last year in Lincoln. But Nebraska can’t afford to give yardage away against Miami with a flurry of penalties. If the yellow comes out in large quantities for Nebraska, Miami has a huge advantage.

Golden Is, Well … Miami coach Al Golden has struggled to return the Hurricanes to glory. SB Nation posted an interview with Golden that discussed whether he was on the hot seat as a result of his relative underachievement.

Dave Bartoo of the CFB Matrix has developed an analytical tool to tell how much difference – positive or negative – a coach can make on a team’s success in what he calls the “Coach Effect.” Last year’s coach effect saw Riley (then at Oregon State) at no. 11 amongst power-five schools, and Golden at no. 41.

Those numbers suggest that, all things being equal, a Riley-coached team should beat a Golden-coached team. And Miami and Nebraska are pretty equal, talent-wise. But the game is in Miami, and if Golden is able to over-perform his coaching history, Nebraska is likely to struggle.

Miami is a three-point favorite at home (according to Covers), suggesting that the gamblers view the two teams as nearly even. But Nebraska looks like it is building steam and starting to settle in to what Riley is asking for on offense and defense. And Golden’s coaching history does not inspire confidence. Take Nebraska and the points.

Follow The Double Extra Point on WordPress.com
Join 144 other subscribers