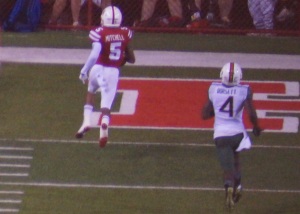 Nebraska football fans settling in to summer are well versed with checklists, having time in the offseason to get their gutters cleaned and barbecues fired up.

New Nebraska head coach Mike Riley has a big to-do list on his desk as he takes the reins in Lincoln. And while there are a number of demands on his attention, here are five things that he has been (or will be) working on between now and September.

Get the New Guy Settled In

Seven years of Bo Pelini’s leadership in Lincoln ended in stormy fashion with the release of a (shock of shocks) profanity-laced self-indulgent tirade from Pelini masquerading as a farewell address to his team.

So when athletic director Shawn Eichorst announced the surprise hire of Riley, Nebraska fans weren’t quite sure what to think. As a result, Riley needed to win the press conference and inspire some confidence in the Children of the Corn as the offseason settled in.

As a smart and particularly handsome analyst observed, many of Nebraska fans’ concerns about Riley are misguided. But his easy-going manner and openness with the fans have gone a long way towards helping him be accepted in Lincoln.

Of course, that all goes out the window if Nebraska goes 1-2 in its first three games this season—which is not impossible to imagine, given the way the schedule lays out. But at least for now, Riley has done what he needed to do.

Settle on a Quarterback

When Riley and his pro-style offense arrived, many Nebraska fans wondered how NU’s quarterback situation would look in 2015. But as the spring unfolded (as observed by Sam McKewon of the Omaha World-Herald and others), it became clear that Tommy Armstrong was the strong favorite to retain his starting job.

But when combined with Nebraska’s commitment from dual-threat quarterback Terry Wilson, a picture emerges that NU will at least incorporate elements of a quarterback run game in its offense going forward. Early indications suggest that Riley will not take the same tack as Bill Callahan, who tried to force a mobile quarterback prospect like Joe Dailey into a pass-heavy West Coast offensive structure, with disastrous results.

So perhaps it’s not so much that Riley is sold on Armstrong per se, but more that Armstrong is the best candidate available to build an offense around.

Even without a change in defense, Nebraska would have struggled with linebacker depth next season. Not counting the incoming recruiting class, Nebraska only has five scholarship linebackers, with two coming off major injuries.

Add in new defensive coordinator Mark Banker’s quarters system which has three linebackers on the field most of the time, and Nebraska’s linebacker depth becomes a significant concern.

The 2015 recruiting class, started by Pelini and concluded by Riley, signed five linebackers (as classified by the Omaha World-Herald). As an early enrollee, Dedrick Young has a chance to be in the mix to start as a true freshman next season, particularly if either Michael Rose-Ivey or David Santos aren’t able to fully recover from last year’s injuries.

As for the rest of the incoming freshman, it’s hard to know if they will be able to contribute right away—or if they will even remain at linebacker. So Nebraska has certainly made a start in terms of addressing linebacker depth, but there’s a long way left to go.

Nebraska under Pelini never hit the heights in terms of recruiting prowess that it did under Callahan before him. And while Callahan has been rightly vilified by Nebraska fans, the fact remains that it will be very difficult for NU to reach the level of a conference champion contender recruiting at Pelini’s level.

Take a look at where Nebraska’s recruiting classes for each of Pelini’s seasons were ranked, according to 247 Sports.

Those are the results for a team that can challenge for a divisional title from time to time, but isn’t ever going to be a serious contender for a conference or national title. Take a look at Dave Bartoo’s work at CFBMatrix, and you’ll see how closely aggregate recruiting rankings—and therefore overall talent level—correlate to wins and losses on the field.

If Riley is going to get Nebraska to where Eichorst expects—challenging for conference and national titles—NU’s recruiting numbers need to improve.

Get the Roster Right

If you look at Nebraska’s current roster distribution (courtesy of the Omaha World-Herald), you’ll see one very disturbing number.

At present, Riley knows of no players with plans to transfer, according to Eric Olsen of the Associated Press. But this item on Riley’s to-do list isn’t optional, it must be completed before the start of next season.