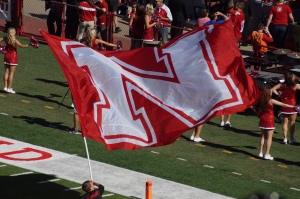 Nebraska football fans, still smarting from seeing Melvin Gordon score again (and again, and again) on the Blackshirts, are looking for anything to distract them from Saturday’s debacle. One exercise is to take a look at Nebraska’s roster and think about who the best NFL prospects are in scarlet and cream.

Judging NFL prospects has some subjectivity to it, of course, particularly when you look at younger kids who have not had an opportunity to see the field. Sometimes experience and what you have seen on film can rule the day, while other times raw potential can make a player an exciting prospect.

So, trying to balance all of those considerations, here are Nebraska’s five best pro prospects.

All draft projections and measurables come from The Sports Xchange.

Even as the school’s record-holder for touchdown receptions, Bell has been far from a dominant force in Nebraska’s offense this year. Much of that, however, stems from the run-heavy nature of Nebraska’s offensive scheme combined with quarterback Tommy Armstrong’s inefficiencies (which is the nicest possible way to say it) as a passer.

At the next level, though, Bell has the speed and hands to get drafted. He is currently projected as a fifth-round selection in next year’s draft. His desire and competitiveness—demonstrated by his ferocious devotion to blocking, if nothing else—should help him stick on an NFL roster next season.

Valentine’s status on this list is a little bit of a projection, but there is plenty on which to base that speculation. For starters, his size (six-foot-two, 320 pounds) give him an idea frame as a run-stuffing defensive tackle. And this year, in his first full season as a starter, Valentine’s talent and athleticism have started to show through.

Placing him this high on the list, of course, is having faith that his skill level will continue to increase until the 2017 NFL Draft. But given his physical makeup and the improvement we’ve seen thus far, it’s a leap worth taking.

If Valentine’s inclusion on this list is a leap of faith, then including Hart on the list is a blindfolded jump off of a bridge. But there are reasons why such a jump might be worth it.

First of all, a big pass-catching tight end can be a game-changer for an NFL offense. Players like Rob Gronkowski for the Patriots and Jimmy Graham for the Saints have demonstrated how those types of players (and the matchup nightmares they create for opposing defenses) can change the entire construct of an offense.

Yes, Nebraska already has one of those on its roster in Cethan Carter. And Carter is certainly a talent, although injuries, offensive design, and poor quarterback performance have limited his contributions.

But Hart is an inch taller, and has a 40-yard-dash time almost a full tenth of a second faster than Carter. Obviously, we haven’t seen Hart on the field much. But we’ve seen precious little of Carter (much to the chagrin of Nebraska fans), so there’s a lot of speculation as to both players as to what they will look like as finished products.

So in guessing between the two, I’m going to lean on the player with the better measurables.

Does it seem that long ago when Abdullah was considered a Heisman candidate and looked to be establishing something special in his senior campaign? After an injury against Purdue, combined with Nebraska’s humiliation at the hands of Wisconsin, Abdullah’s performances seem to have been lost in the shuffle.

But Abdullah is still a remarkable talent, with balance, speed, and deceptive power combined with a low center of gravity that should make him an interesting prospect at the next level. Currently viewed as a second-round pick in next year’s NFL Draft, Abdullah should hear his name called on the draft’s second day and factor heavily into an NFL squad’s future plans.

One of the very few silver linings of Nebraska’s evisceration at the hands of Wisconsin on Saturday was the fleeting thought that it looked so bad it might convince Gregory to stick around for his senior campaign. After all, the wishful thinking goes, the defense looked so bad that it might hurt Gregory’s stock with NFL clubs.

Fat chance. Not only is Gregory a first-round projections, many analysts see him going in the first few picks of the draft. Given his combination of size, speed, length, and instinct, it’s not hard to see how he draws comparisons to Jadaveon Clowney and Javon Kearse (according to Chase Goodbread of NFL.com). Gregory looks to be the highest-picked Nebraska player since Ndamukong Suh went no. 2 overall to the Detroit Lions in 2010.

Which makes Saturday’s defensive embarrassment against Wisconsin all the sadder for Nebraska fans, as it likely is a waste of Gregory’s remarkable talents in scarlet and cream.