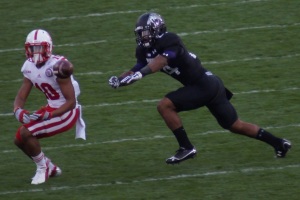 Nebraska football fans have had an off week to recover from NU’s near-miss against Michigan State, and will be looking for x-factors in the upcoming match against Northwestern. While Nebraska enjoys a 3-1 record against the Purples, it’s not at all hard to imagine that number being 1-3.

Two years ago, Nebraska was down 12 points with 8:31 to go, needing a miracle comeback to pull off a 29-28 win. And of course, last year Northwestern had Nebraska beaten when the clock struck 0:00, with NU needing the “RK III to 1” Hail Mary from Ron Kellogg to Jordan Westerkamp to preserve a win.

If there’s any obvious plan for Nebraska, it’s this one. For the season, Abdullah has averaged 6.36 yards per carry, shouldering the load for Nebraska’s offense. But against Michigan State, Abdullah averaged 1.9 yards per carry. Don’t be fooled by Abdullah’s two touchdowns.  The Spartans neutralized Nebraska’s biggest threat, which was a major factor in their win.

For Nebraska to get back on track, Abdullah needs to find his mojo again. Facing a Northwestern defense that is a respectable no. 55 nationally against the run, success on the ground against the Purples is not a foregone conclusion.

Whether Nebraska is able to get Abdullah back on track is the single biggest decider in terms of whether NU will escape Evanston with a win.

Sure, freshman running back Justin Jackson looks like he might have been the playmaker Northwestern was looking for after the departure of Venric Mark on the eve of the season. Jackson has been terrific, averaging 4.48 yards per carry and providing the Purples’ offense with an unexpected spark.

But it is still senior quarterback Trevor Siemian that makes Northwestern’s offense really go. He’s completing 58.8 percent of his passes, has thrown for over 1,300 yards, and has averaged 37.7 attempts per game. That means Northwestern isn’t afraid to put the ball in the air, rather than relying on the ground to move the ball.

If the Blackshirts shut Siemian down, they go a long way towards getting a win against Northwestern.

I know, I know, I’m breaking my Doctor Strangelove rule from a few weeks ago and asking Nebraska to stop turning the ball over. But this is a very specific admonition, avoiding the interception. While Northwestern hasn’t done anything this season that jumps off the statistical pages, one thing the Purples have done well is intercept opposing quarterbacks.

Northwestern has nine interceptions over six games, tied for first in the Big Ten. Nebraska quarterback Tommy Armstrong has struggled with accuracy and decision-making, with five interceptions in six games and a handful of others which Armstrong was fortunate to see hit the turf.

That has the danger to be a deadly mix for Nebraska. While it’s likely that NU will feed the Purples a heavy dose of a rushing attack, there will be times in the game where Armstrong will need to make plays with his arm. Ensuring he makes those plays to white shirts, rather than the goth gear Northwestern will be rocking, will make a big difference on Saturday.