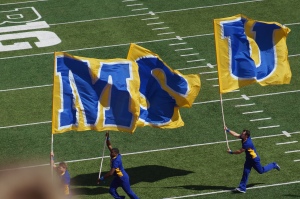 Nebraska football fans got a huge scare in Week 2 against FCS opponent McNeese State. The Cornhuskers were tied with the Cowboys 24-24, with 20 seconds left and the FCS squad having all the momentum, before Ameer Abdullah took a check-down pass from Tommy Armstrong, made five tacklers miss, and ran 58 yards for the winning touchdown.

Predictably, Nebraska fans were in varying stages of panic after the near-miss to a second tier team.

But with the benefit of a little time to reflect, let’s think about what Nebraska fans should—and should not—worry about as a result of this “win.”

There’s no doubt Nebraska’s contest against McNeese State was a strange sight to behold. Nebraska dominated its FCS opponent in the first half, with the score remaining close only because of a 98-yard interception return for a touchdown. Some second half adjustments, and Nebraska’s superior talent and depth should win out, right?

Obviously, that didn’t happen, and the second half was truly the more frightening. The Cowboys had 19:56 time of possession in the second half, as opposed to Nebraska’s 10:04. Nebraska was 1/7 on third down conversions. Prior to the “Ameeracle” play where Abdullah went 58 yards for the game-winning touchdown (yeah, I’m willing to go with the building meme), Nebraska had run 23 plays in the second half.

For 52 yards. Which is an average of 2.26 yards per carry. Against an FCS opponent.

As Brandon Vogel from Hail Varsity observed, it appeared that “Nebraska’s offensive line appeared to get handled by an FCS front.” And given the statistics above, it’s hard not to come to that conclusion.

So is that true? Was McNeese State’s line really physically stronger and able to push Nebraska’s line around?

Clearly not. If that was the case, then there’s no way Nebraska could have averaged 7.37 yards per play in the first half. Nor could Nebraska have averaged 8.52 yards per play against Florida Atlantic last week, an FBS program (although, admittedly, probably an inferior team to McNeese State).

So, if the problem isn’t physical, what is it?

Be Concerned About Nebraska’s Mental State

But that alone doesn’t explain the near-upset. And given how Nebraska performed earlier, it’s almost impossible to avoid the conclusion that Nebraska wasn’t right mentally against the Cowboys.

Abdullah said it himself, as quoted on Huskers.com.

“I feel like our level of respect for the game this week was not good enough.  It definitely showed.  That’s on me as a captain.  I have to assist that as the week goes on, but I was reluctant to say something, and I promise that it is the last time that will happen.”

So there’s your answer in black and white. Nebraska didn’t “respect the game” enough during the week, meaning that NU’s preparation for an FCS opponent wasn’t sufficient. Couple that with injuries to key contributors like Randy Gregory, Kenny Bell, and Jamal Turner,  and quarterback Tommy Armstrong getting tentative after the pick-six, and you get an anemic performance that almost led to the biggest upset in Nebraska’s modern history.

Does that mean Nebraska fans shouldn’t worry? In the short term, perhaps. Nebraska under head coach Bo Pelini has a history of bouncing back and performing well after a sub-par showing. Even with the travel and the strange start time (9:30 p.m. central time), Fresno State is nowhere near the 11-2 BCS-buster of a year ago. A committed performance from Nebraska should be more than enough to take care of business next week.

But for the rest of the season? When Nebraska yet again falls prey to mental lapses causing the team to under-perform, as it has done throughout Pelini’s tenure? We got the answer to that question from senior cornerback Josh Mitchell, as reported by Steven M. Sipple of the Lincoln Journal-Star.