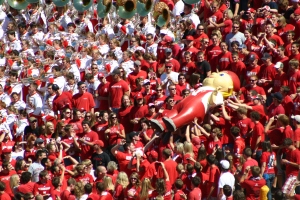 Nebraska football fans have been freaking out a little about injuries, and rightfully so. Over the course of last week, Nebraska lost a likely starting NICKEL (Charles Jackson), MIKE linebacker (Michael Rose), and backup I-back (Adam Taylor) to injury, in addition to likely starting safety LeRoy Alexander to a suspension.

The reaction was predictable.

.@Pontifex Do you have any blessings that you can say for the Nebraska football team? Something for injuries would be best.

Those losses are all important, and could impact Nebraska significantly in 2014. But there is one loss to injury that hasn’t gotten nearly enough attention, one that could cost Nebraska wins.

Who, you might ask? (Go to 0:41 of the video for the uber-geek reference). Well, he’s Nebraska’s long snapper, and he’s going to be out for “a while” according to Brian Towles of Corn Nation.

And we know how disastrous Nebraska was at punt returns, where NU was no. 123 (!) nationally at 3.04 yards/returns. Luminaries such as Tom Osborne (as reported by Lee Barfknecht of the Omaha World-Herald) and Brandon Vogel (of Hail Varsity) have pointed out the critical importance of field position in a team’s ability to succeed.

(So has this guy, but who has time for that?)

The placekicking job was already a huge worry. Nebraska coaches clearly did not have confidence enough in scholarship kicker Bondi, as they brought in transfer Pat Smith in 2013 who won the job (and ultimately the game for Nebraska at Penn State).

This year, they’ve brought in another kicker, this time true freshman Drew Brown. While nothing has yet to be announced, it’s hard not to see Brown having every chance to win the starting job.

That would mean Nebraska would be rolling into the 2014 season with a true freshman as a placekicker. We saw last year how a win in overtime in a hostile environment rested on the foot of a kicker. How much harder will that be if that kicker is less than a year removed from his high school senior prom—and with questions at long snapper to get him the ball in the first place?

So, let’s assess. Awesome at getting touchbacks on kickoffs. Average (at best) in other areas. Monstrous questions at placekicker (either a true freshman or a second choice kicker and an untested long snapper), the one area where stability and confidence is desperately needed. And a punt return game that was an unmitigated disaster last year.

Forget about worries in the secondary. If Nebraska fans are going to panic about something, panic about special teams.