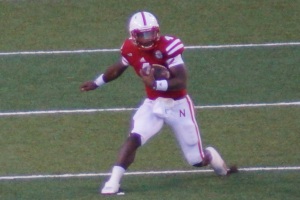 Nebraska football fans know how close the 2014 season is, and fans are already looking forward to seeing their heroes on the field. While the roster is full, there are some players that stand above the others as players to watch. When combining athletic ability with opportunity to play, here are the top 10 Huskers for 2014.

Collins makes this list in large part because of his versatility. He will likely be starting, or at least in the rotation, as a starting defensive tackle alongside Vincent Valentine. But the staff has also experimented with moving Collins out on the edge as a specialized pass rusher. Collins doesn’t get the kind of attention as his more-famous defensive end, but he could be a key part of a dominant front four for Nebraska.

Nebraska hasn’t really had a good history of using dangerous tight ends. Call it the “Mike McNeil” effect, to which Kyler Reed fell victim. So it’s a little scary to include a tight end on this list.

But Carter has the kind of athleticism to be a real Rob Gronkowski-like game changer for Nebraska’s offense. And now that Nebraska is in year one of the true post-Taylor Martinez era, perhaps a little more sanity in NU’s offensive structure can be restored and Carter can grow into the offense.

Kenny Bell the personality (and the hair!) is so big that it might just overshadow the talent of Kenny Bell the football player. Ironically enough, it was a special teams play against Penn State that was last year’s real reminder of how dangerous Bell can be (although this catch comes pretty close).

Coming into 2014, Bell is Nebraska’s most explosive weapon, and will likely get nearly as much attention from opposing defensive coordinators as Ameer Abdullah. That in and of itself should tell you how good Bell the player really is.

It’s a cliché that you can’t coach speed. Well, it’s pretty hard to coach size, and Valentine (six-foot-three, 320 pounds) has size to spare. Of course, size without skill and experience isn’t much help, but Valentine demonstrated skill and got experience in the middle of Nebraska’s defensive line as the 2013 season wore on.

Now looking to be a fixture in the middle of Nebraska’s defensive front, Valentine gives NU the opportunity to present more three-man looks and free up pass rush specialists like Maliek Collins or Marcus Newby to put additional pressure on opposing quarterbacks. While Valentine’s contributions may not show up on a stat sheet, his success could be one of the most critical factors for the Blackshirts in 2014.

In the course of 48 hours, Nebraska lost two likely starters (LeRoy Alexander to suspension, Charles Jackson to injury) in the secondary. That’s going to make the returning starters, particularly Corey Cooper at safety, even more important. Cooper has the athleticism to play against both the run and the pass, a critical need for safety in Bo Pelini’s defense. A full season as a starter, and a leader, should give Cooper the chance to really shine.

I think Armstrong right now is suffering from what a lot of college players encounter when they go back to school for a final year rather than head to the professional ranks. Familiarity breeds contempt, as we in the media and in a fanbase become inured to a player’s skills, overlook the mitigating circumstances, and focus on the flaws in a player’s game.

There are certainly flaws in Armstrong’s game. A 51.9 percent completion percentage and a 9/8 TD/INT ratio (from CFBStats.com) is simply not good enough for Nebraska to win a division, much less a conference championship.

But Armstrong is also 7-1 as a starter. He led Nebraska to a win over Georgia (which, last I checked, was an SEC team) in last year’s Gator Bowl. He was thrown in as the starter last year with no real training camp and running an offense designed for the unique skills of Taylor Martinez.

This year, Armstrong will have the benefit of all those factors, as well as a year of experience under his belt. 2014 will be his time to shine.

Lewis should be a player that gives Nebraska fans pause. Not only is he a former Colorado Buffalo, He had to serve a jail sentence this offseason for his part in an assault. He’s the type of transfer that other schools can use as an example of a “win at all costs mindset.”

His arrival hasn’t generated much hand-wringing, though, perhaps in part because he’s an offensive lineman and not a high-profile player. But he looks to be slotting in at left tackle, the most important position on the offensive line. And he could provide the bedrock for a punishing Nebraska rushing attack

Nebraska’s primary concern at linebacker in 2014 has to be youth. The starting SAM spot looks to be in question, and it was sophomores Michael Rose and Josh Banderas battling out for the starting MIKE position before Rose’s season-ending injury.

But at the WILL? It appears Anderson has that spot taken up, and he looks to have the senior leadership and athletic ability to anchor the middle of Nebraska’s defense.

Gregory might be the best football player on the 2014 Nebraska squad. Indeed, some analysts (like Brent Sobleski of the Detroit Free Press) have already tapped him as a potential no. 1 overall pick in the 2015 NFL draft.

No, not the first pick from the Big Ten, or the first defensive player. The no. 1 overall pick.

That may be Gregory’s ceiling, but I’m not quite ready to place him there based on one season’s work. There’s plenty of reason to think improvement is on the way for Gregory, not the least of which is that he will have a full preseason of preparation and last year’s experience to draw from.

But until I see it on the field, I still think there’s one player on the roster I would say is better than Gregory.

There’s been a lot of superlatives thrown Abdullah’s way, for his play on the field and his amazing off-the-field representation of Nebraska. He could end his career being the first player to get 1,000 rushing yards in three seasons, and needs 1,804 rushing yards—a huge, but not inconceivable number—to become NU’s all-time leading rusher.

But why I think Abdullah is Nebraska’s best player on the 2014 roster has to do with more than that. It’s summarized by the video (check the 2:47 mark), which is of Abdullah’s first down run against Northwestern to keep the drive alive and make the Kellogg-to-Westerkamp hail mary possible. Just watch it again, and marvel how he basically on his own made three defenders miss and got the yardage needed to keep the drive alive.

That’s what Abdullah brings, and what makes him Nebraska’s best football player on this year’s roster.

For a different look at Nebraska football, check out The Double Extra Point.

Follow The Double Extra Point on WordPress.com
Join 144 other subscribers