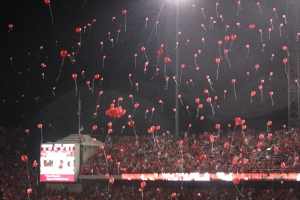 photo and stories by Patrick Runge

Nebraska football fans will be anxiously watching the 2014 season to see which players will become breakout stars. It’s the breakout stars, not the proven commodities, that can help propel a team like Nebraska from almost-there to contending for conference and national titles.

So who are the Cornhuskers primed for a breakout season? Here are five candidates.

A smart and particularly handsome analyst has already tapped Newby as Nebraska’s x-factor for the 2014 season. It’s not hard to see why, given his ability to score every time he touches the ball, and given the trust he’s already earned from the coaches given his playing time last year as a true freshman.

Ameer Abdullah is the undisputed leader of Nebraska’s offense, and Imani Cross is a capable backup and change-of-pace back. But Newby should still get his chance to shine, both on offense and on special teams. If he takes advantage of those opportunities, he could be—well, could be the x-factor for Nebraska’s offense.

Valentine has always had the size (six-foot-three, 320 pounds) to excel as an interior defensive lineman. But towards the end of his freshman campaign last year, Valentine began to show flashes of talent and understanding that could make him a true anchor for Nebraska’s defensive line.

With the size of a true nose tackle, Valentine gives Nebraska the option to run a three-man front and put more pass-rushing specialists on the field. While that might not show up on the stat sheet, Valentine could end up giving the Blackshirts a flexibility to attack opposing offenses not seen in some time.

For some reason, Nebraska under Bo Pelini sems hell-bent to ignore talented offensively-minded tight ends. From Mike McNeil to Kyler Reed, Nebraska has discovered true mismatch weapons at tight end—then proceeded to let them wither on the vine.

Nebraska has another opportunity with Cethan Carter, who has the size, speed, and athleticism to be the kind of weapon for NU that Rob Gronkowski is for the New England Patriots. At some point, Nebraska’s coaching staff has to take advantage of an offensive-minded tight end like Carter—right?

Nebraska’s linebacker corps is a mess, but in a good way. So much of Nebraska’s linebacker talent is young, and has yet to truly seize a starting job and a position on the field. Michael Rose may be an exception at MIKE, but other than that the depth chart is pretty fluid.

The exception other than Rose, of course, is Anderson.  As a senior with three years in the program, Anderson should have the experience to help him excel. And if 2014 can keep him free from injuries that have derailed his previous two campaigns, Anderson has the talent to become the true star of Nebraska’s linebacker corps.

Last year, Gerry was able to earn playing time as a true freshman at linebacker. But his size (six-foot-two, 205 pounds) and lack of experience led him to struggle and ultimately lose his playing time.

This year, he has moved from linebacker to safety, a position his size and speed more naturally fit. Opposite Corey Cooper there is a safety spot open to be won, and Gerry has every opportunity to win the job and earn a Black Shirt.